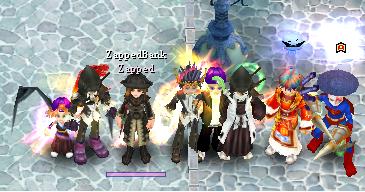 Need to Clean up Guild.

Need to Clean up Guild.

Is getting time to clean up guild from un active members. I will give everyone a chance to say here if you are going to be active. Those who have switched to play BSO. I don't mind as long as you come in DSO at least 2 to 3 times a week for more then 1 hr at a time. If you going to be un active please Join My Navy 6 guild. I created Navy 6 for those who want to stay Members of Zapped but are going to be un active. When you want to come back Active you will have Top Priority over any other player to be in Main Guild. If you are going on vacations Please Join Navy 6. When you come back same applies to you, You will be first to be accepted in Main Zapped Guild. I'm not leaving DSO unless they close it down for good. I know some of you come on at different times then I do. So I really don't know who is active or not active. So if you find you were kicked, Don't be afraid to re apply. This way I know you are on different then me. But if you can Please say in Post here Active, But different time. Give Name in game. So I know who you are. Some ppl have signed under other names in Forum that is different then in game. If you going to BSO and going to be playing there for some time then plz let me know so i can add you to our Navy guild.

I give you until July 3rd to reply.
For those that do come to forum plz inform the ppl do not use our forum. And get them to let me know. Thanks for understanding. I would rather have a guild of 40 to 50 active ppl then 80 members unactive.

And i suggest you kick everyone...and the active members will re-apply...so no worries

dont kick me please~ moon accept "sycter" to the guild later on. he is sassuke. he is changing to SS now.

Don't worry BuGy I never kicking you. You and Mercury are my most active. But I was refering to ppl like Venluckey which he already told me he is play BSO and does not plan on coming back to BSO for a while.. ShyNight. they maybe my family but they understand. And they know if they come to DSO to visit i can accept them for the day or what ever. I already personnally talked to them. So they are ok with it. And Ven will help keep up the Forum. Um Not sure about Genisis because he started his own guild in BSO. And I think he just coming in just enough to say he is active but not. Time will tell. That is why i set up Navy 6 So ppl who we really like and want to keep part of the guild when they going to be off playing BSO. I not totally kicking them. I am just requesting that they go in the sub guild. I made Hottie the guild leader of the Navy 6 And I am just as active on her as I am on Nya and MoonKiss. So they can still talk to me when i have Hottie online. But we do need an active guild. And if you looked at the list. We have alot of ppl applying. Like Piggy I really like him when he is online he is fun to talk to. But I haven't seen him on for awhile. mistelle, I really like her too. But since she was hacked I have seen her active on DSO forum but not in game. So I don't know where she stands. Just keep telling ppl to let me know if they are going to be active, leaving for BSO, Real life, vaction, ect... If you going on vaction and going to be afk for a long time Please Join the NAVY 6 Guild. When you back come back to main guild you have priority over any one on the list of ppl wanttabe's ... I have only 1 other Alt in guild and that is Nya. That is so when I not on MoonKiss i can still talk in guild.. Moon is now lvl 120. My objective with her is complete. But she is my Main and she is guild leader. So i can't take her out and put her in Navy. But when i reach my objective with Nya I will Move her to the Navy. And start my Phyliss Cruz. So what i am saying if you have Alts in guild just so i no make mistake and kick move them to the Navy if you aren't using them all the time. PPl will come and go in guild. it is expected. Just don't sign all your accts to guild. leave space for other ppl. (or maybe i should rethink that one if I already know i like you and if your alt is there in guild i no have to bring in some one I don't know) Don't know i will think that one a little more. XD
BuGy and Mercury I going to need your help in kicking unactive ppl. Some of the ppl I think is unactive i see come on all of a sudden. Or they are playing different times then me. Maybe guild is really full of active ppl I just not here when they are. Is why you two are my extra eyes. And we will be Voting in replace ment officers for Ven and Shy. We will make it a guild vote. Ok I said all i can think to say. So Have Fun Game... And Genesis it does not mean I am kicking you from forum. I wouldn't do that. Your welcome to forum as long as you are Zapped loyal.

eheh...
moon let info other who got kick from guild for inactiviting/hacking-scamming/not loyalty

As long as members are signed up in forum if i kick them from guild in game and as long as they are signed under their names in game i can email them of reasons for kicking and give them chances to reply. I see mistrelle come online tonight I am glad to see her. WB mistrelle. Hope everything is ok.

did i see who is mistrelle o.0?

this is all the one i havent seen for quite awhile. not sure whether they dont play or they are playing while im sleeping o.o theres more. but its kinda sad to tell. i mean they used to be active and friendly. but now havent seen em.